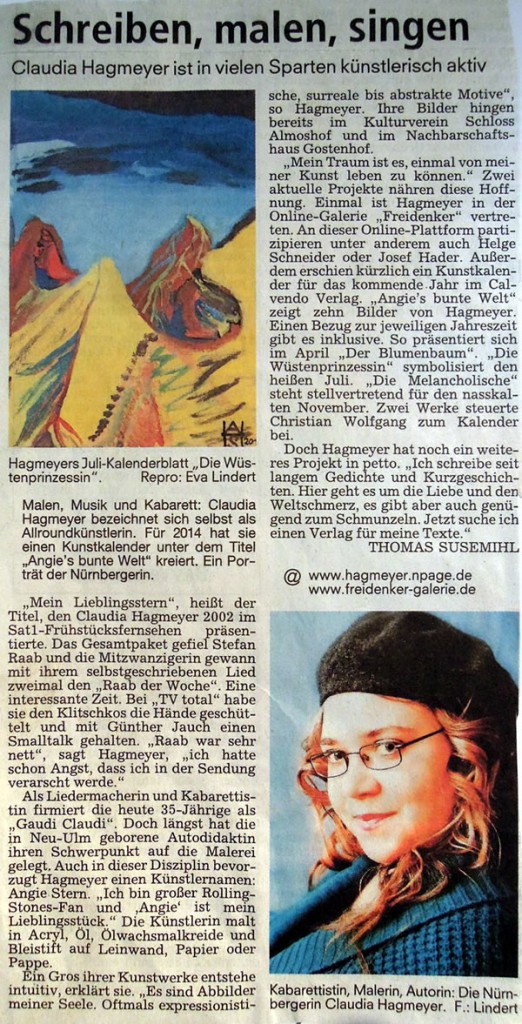 Angie Stern’s real name Is Claudia Hagmeyer. She was born in 1977 in Neu-Ulm, Germany. As a Child she already has won painting competitions and has visited the FOS High School For Design in Würzburg, Germany.

At young age she also already wrote songs for guitar, children’s stories, stories and poems, with which she has taken part on small and big stages since 1998 as song writer and cabarat called “Gaudi Claudi” (beginning in Würzburg at “Poetry Slam”) .
In 2002 Stefan Raab discovered her at German TV show “Morning Star” on Sat 1, where she played her song “Lieblingsstern – ich hab dich sehr sehr gern” on guitar. She was invited several times to Raab’s TV Show “TV Total” where she played this song four times and was able to win the award “Raab der Woche” for two times. Her Song “Lieblingsstern” was part of the 2002 released Stefan Raab CD called “HITS Total Volume 3”. She was also part of the 2009 released Stefan Raab DVD called “10 years TV-Total”.

Stefan Raab was one of the most famous TV Entertainer in German Television.

Afterwards she successfully finished commercial training with IHK certificate in Nürnberg. She also successfully attended the class of professor Angermann at the academy of arts in the winter of 2009 / 2010 – where she already had performed with her guitar some years ago.

I have taken part in several art- and literature competitions. A poem of mine was published in the Brentano Society Reference Work which is available in most libraries. I was often part of articles in German newspapers and art magazines (“100 Bilder”, “Mein kreativ-Atelier”). And I create a calendar for 2018 called “Angie`s bunte Welt 2018”. You can buy it on Amazon for example, look at my homepage www.angiestern-art.de
I am also looking for a publisher.

In the beginning I painted very realistic, but since 10 years I discovered other own art styles like surrealistic, intuitive expressionism, made with acrylic, oil, pastel on paper, canvas and carton. My pictures are part of my soul, childlike naive forms, that enclose as original unique symbols after watching for a longer time.

February, 2011 solo exhibition from Angie Stern  at  office for tourism and leisure time in Ansbach, Germany

2011,  solo exhibition, fantastic journey of the soul, in free gallery and art association  “Armer Teufel” Nuremberg, Germany  with joint exhibition “Goho 2011” – Gostenhof Garage and Atelier Days – where I am also in the printed catalogue, in Nuremberg, Germanay

From June 14, 2017 until June 18, 2017 I have taken part in “Art Basel” Exhibition located in Basel, Switzerland, in cooperation with Swiss gallery Artbox”

From March 5, 2018 until March 16, 2018 I have taken part in Art fair “Armory Artweeks” in New York, in cooperation with Swiss gallery Artbox.

From August 15, 2019 until August 19, 2019 I have taken part in Art fair Swiss Art Expo in Zurich in Switzerland in cooperation with Swiss gallery Artbox

From August 25, 2021 until August 29, 2021 I have taken part in Art fair Swiss Art Expo in Zurich in Switzerland in cooperation with Swiss gallery Artbox.

WRITING, PAINTING, SINGING
Claudia Hagmeyer is in active in large areas of art
Painting, music, cabaret: Claudia Hagmeyer calls herself an allround artist. In 2014 she has created an art calendar called “Angie’s colorful world”. Here a brief summary about this Nuremberg artist.
“My Lieblingsstern” is the title that Claudia Hagmeyer has presented in German Sat 1 Morning TV Show. This performance Stefan Raab liked very much and the woman with age in the middle of twenties has won the award “Raab der Woche” two times with her self written song. A very interesting time. At “TV Total” she shaked hands with the Klitschko Brothers and had a small talk with Günther Jauch. “Raab was very nice” said Hagmeyer, “i was already fearful to be pranked in the show.”
As a song writer and cabaret girl the now 35 year old woman was known and entered the stage as “Gaudi Claudi”. But nowadays she, who was born in Neu-Ulm and is a self-educator, has focused her attention towards painting. Here also Miss Hagmeyer prefers to have an artist’s name : “Angie Stern”.
“I’m a big Rolling Stones Fan and ‘Angie’ is my favourite song.”
The artist paints in acryll, oil, oil wax chalk and pencil on paper, canvas and cardboard.
A lot of her artwork emerges intuitive, she explains. “They are portrayals of my soul. Often expressionistic, surreal and abstract themes” reports Hagmeyer.
Her paintings already were presented in “Kunstverein Schloss Almoshof” and in “Nachbarschaftshaus Gostenhof”.
“It is my dream to be able to live from my art one day”. Two current projects support this hope. First of all Hagmeyer is represented in the online gallery “Freidenker”.At this online presence you can find among others famous names like “Helge Schneider” or “Josef Hader”.
Furthermore an art calendar was published recently in the Calvendo Publishing Company called “Angie’s bunte Welt”. It contains ten paintings from Miss Hagmeyer.
In these paintings there can be found a connection to the current season of the year. For example the month of April is represented by a painting called “The Flower Tree” that containts a tree with colorful flowers. “The desert princess”symbolizes the hot july.
“The melancholic woman” is representative for the wet and cold november.
And yet another project is planned by her for the near future. “I have been writing peoms and short stories for a long time.They act about love and the pain in the world. But there is also plenty to grin about. Currently i am still looking for a publisher for my texts.”